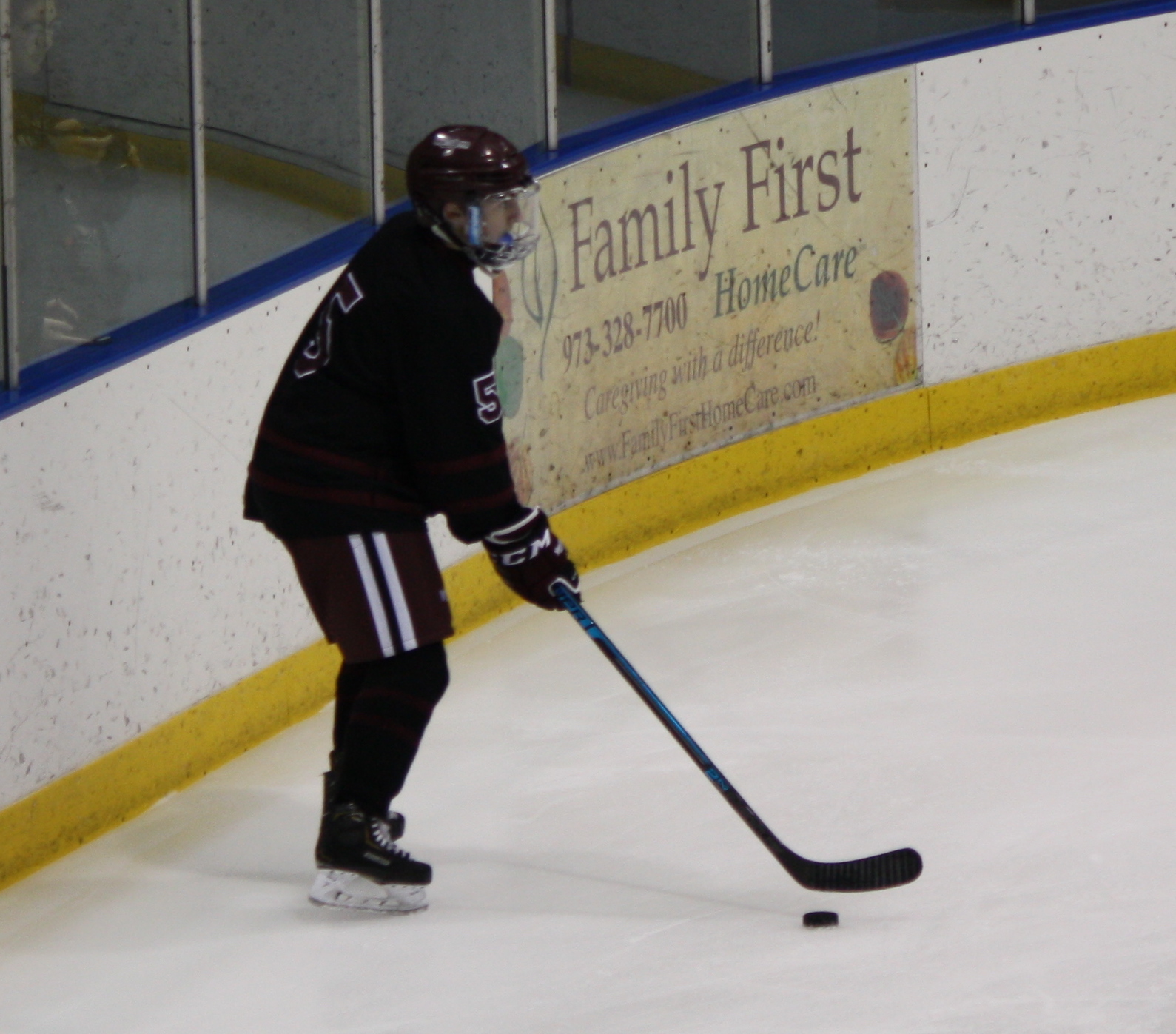 Photos and story by Mike Gurnis

MORRIS TWP. -- Prior to Saturday night's contest with Morristown, Morris Knolls-Hills coach Tim Kepler had a simple, yet seemingly lofty challenge for his team.

He asked his players to focus on the defensive side of things, and hold the opposition to less than nine shots in the game.

They were able to do just that, as it held a young, but talented Morristown squad to just eight shots on goal. It capitalized just enough on offense as well, as Andrew Ryan recorded a hat trick to propel Morris Knolls-Hills to a 3-0 win over Morristown at Mennen Arena.

“I think that just shows the group we have," Ryan said of Kepler's challenge. "When we’re told to do something, we just know that we have to do it and we’ll get good results. No goal is too big as long as we work together, and we can accomplish that as a team."

In total, it out-shot Morristown 31-8 in the contest, as it controlled possession in the offensive zone, while surrendering very few grade-A opportunities defensively. Freshman goalie Elliot Marken stopped all eight shots for the first shutout of his varsity career.

The fact that Knolls-Hills got on the board as early as it did certainly helped dictate the rest of the game. It came out flying right out of the gate, and just 2:33 into the game, Ryan put home a rebound in front to give his team the early advantage.

It created several solid chances, and had some chances to extend its lead in the first period, but Morristown goalie Dylan Peck made several key saves to hold the deficit to one.

In fact, Peck managed to hold Knolls-Hills off the board until the midway point of the third period, when Ryan capitalized off a feed from Timmy Kepler and sniped one home from the left circle on the power play. He then completed the hat trick with under four minutes to go, as he scored on a partial breakaway to seal the win.

“Definitely a team win. Guys were doing their jobs, forwards were helping the defense on the breakout which made it easy for us to get the puck out," Ryan said. "There wasn’t a lot of havoc in front of the net with the defense clearing pucks out. We emphasize playing down low and working it up to the point and getting to the net, and I think that created a lot of shots and opportunities. We need to find a way to bury pucks. It was a dominant performance, but that could have been a bigger win.”

It marked a tough loss for a young Morristown squad that has just three seniors, and was riding high off its first Mennen Division win since 2017-18 when it beat Madison on Thursday night. While it has had some solid results early on this season after a one-win campaign last year, inexperience ultimately cost the team in this game, according to head coach Bobby Jones.

“I think in this particular game, some of our players were showing their age a little bit," Jones said. "Especially with the strength on the puck battles, just the quickness in decisions, the quickness of play. Knolls-Hills was certainly a step ahead of us for the majority of the game. You could tell mentally, they were just making those decisions quicker. We couldn’t get shots through. They did a good job of slowing us down and getting sticks on us, and almost every puck battle was won on their part.”

For Morris Knolls-Hills, it marked another high in what has been an up-and-down campaign for the reigning Public A state champions. The win improved it to 3-2-2, after recording back-to-back ties this week against Randolph and Lakeland.

It is a squad that knows all too well what a long season it is, after it went through a season last year which started out strong, before going a month without earning a win before finding its footing in just enough time to make the state playoffs and make its run.

“Definitely the ties frustrate us," Ryan said. "We knew coming into this game that we needed to get back into the win column, which we accomplished our goal. After last year’s state championship win, our goal is to get back and that’s our goal every year. I think we’re off to a slow start, but I think we have the talent and work ethic to definitely do it again.”

Kepler added, “We’re working hard at times, and at times we’re not. We’re trying to find some consistency and composure here. We’ve had high games, we’ve had low games, we’ve had trouble putting the puck in the net here and there. We still have a few things to get going and work on. It’s only game seven, so we have a long way to go here. It’s how you finish, not how you start. We started not bad last year, and then went on a nine-game winless streak, then we ran it off. We’re just taking it one game at a time.”

Kinnelon will be forming a tri-op with Sparta and Jefferson in ice hockey for the 2020-21 season.

This week, the USHL Phase I and II Draft was held, with Phase I for "futures" players on Monday, followed by Phase II for all junior hockey age-eligible players that have not been protected by a USHL

Alex Laferriere, who was a standout during Chatham's run to the Public C final in the 2017-18 season, made the NHL's final Central Scouting rankings which were released on Wednesday. The 18-year old H

Welcome to the Morris-Sussex Hockey Report, a blog dedicated to coverage of high school hockey in Morris and Sussex County, New Jersey.